Should you invest in the Blade Hunter Indiegogo campaign?

On 4th December, Richard Driscoll will launch an Indiegogo campaign to raise funding for his film Blade Hunter. Actually, let me qualify that. Richard Driscoll says he’s going to launch an Indiegogo campaign on 4th December. But as he has a long track record of saying he’s going to do things that he then doesn’t (or in some cases, claiming he’s done things that he certainly hasn’t, his grip on reality being somewhat tenuous), any announcement like this must be taken with a grain of salt.

In fact this is what it says on the film’s website:

The Blade Hunter crowd funding campaign will start Friday 4th December 2015 on Indiegogo Where you will get the opportunity to become involved with this exciting project. Become a member of the “Secret world of Blade Hunter” and receive a weekly update of all that is new with the film. Receive free gifts and get your chance to meet the stars and buy exclusive merchandise that will not be available in any store.

Now let’s assume for a moment that he does indeed launch his Indiegogo campaign next month. The question is: should you contribute? Let’s consider the pros and cons. 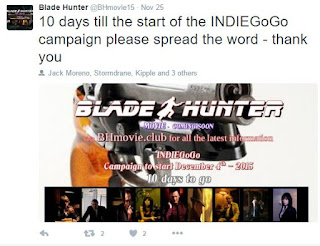 I would say the CONs have it. Much as I would love to see another Richard Driscoll movie, Blade Hunter is never, ever going to get made so save your money.

On the other hand, there are lots and lots of great little movie projects on Indiegogo and Kickstarter that you could invest in, which will get made, aren't based on ripping off the copyright of major Hollywood Studios and aren't produced by convicted fraudsters.
Posted by MJ Simpson at 18:34