Films that sneaked out when no-one was watching no.1: Demon 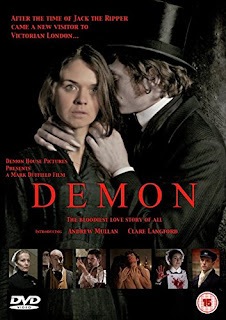 Mark Duffield’s Victorian gothic horror Demon was shot in 2010 and screened at the Festival of Fantastic Films in 2012, followed by couple of festivals in the States in November 2012 and February 2013. Since when it has been missing in action.

Imagine my surprise to discover that in June this year Mark self-released (through his Demon House Pictures company) a limited edition DVD of the film, available now from Amazon. Only 1,000 discs were pressed so get it while you can. It’s an all-regions PAL disc including a commentary and interviews.

Synopsis: Set in Victorian London, DEMON is a dark Gothic horror love story of a young man named Lorcan, who visits the London Hospital for treatment of a blood disorder. At the hospital Lorcan meets Amy, a young nurse and they have an instant attraction to each other and fall in love.

However, Lorcan soon discovers that he is cursed from birth, a curse that should he love or be loved, he will transform into a demon. Soon, the Demon appears and causes bloody havoc. It is only Amy who can restore Lorcan and destroy the Demon.