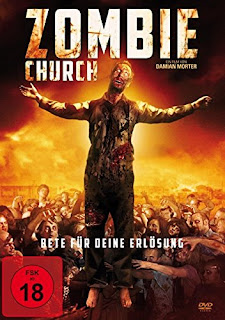 Here is the sleeve for the German DVD of Zombie Resurrection, scheduled for release by Edel Germany GmbH in January. It has been retitled Zombie Church but uses the same artwork as the UK sleeve. The page on Amazon.de lists the two directors as Jake Hawkins and Andy Phelps, which is correct.

But look again at this sleeve. What’s that underneath the ‘ie’ of ‘Zombie’?

What? No. This is ein film von Jake Hawkins und Andy Phelps. Damian Morter is the director of a completely different (but also very enjoyable) British zombie film, Book of the Dead aka The Eschatrilogy. Plus a short called Zombie Run. But he didn’t have anything to do with Zombie Resurrection (as far as I know). He certainly didn't direct it!

Occasionally artwork used for one film in one territory is used for a different one elsewhere (as happened with The Borderlands) but I’m pretty sure that this release is Zombie Resurrection. Everything else on that Amazon.de page checks out, including the cast and the synopsis.

I’ve seen some sleeve cock-ups in my time but: wow. Just wow.

[Update: The title was later changed to Zombie Priest - but with Damian still credited, - MJS]
Posted by MJ Simpson at 00:35