The Devil Complex becomes The Devil Within 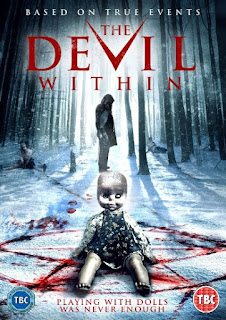 Here’s one I wasn’t aware of. The Devil Complex is a found footage picture about an expedition into the wilds of a vast Romanian forest.

It is being released in the UK on 9th May by Point Blank, retitled The Devil Within. I’d wager a penny to a pound that the sleeve image bears no relation whatsoever to anything actually in the film.

The film is the directorial debut of Mark Evans who produced Gangsters, Guns and Zombies and the unreleased Forest of the Damned 2. The cast includes Tom Bonnington (A Haunting at the Rectory, Le Fear II, The Wrong Floor) and Bill Hutchens (Human Centipede 2 and 3).

Synopsis: In November 2012 Rachel Kusza and her team of film makers travelled to Transylvania to document the Baciu forest; a forest with a dark history of strange occurrences, ghost sightings and countless cases of missing people. The film crew were never heard from again…

After searching for them for two years, Howard Redman, Rachel's teacher, found their camera buried in the snow. Before taking own his life in February 2014, Redman uploaded the footage to the internet. It shows the crew's dark and horrific journey into the woods and why the locals refuse to enter. They say that if you enter the forest with evil in your heart, or dark secrets in your past, the forest will expose you and show you who you really are, before punishing you.