Holy crap! After eight years, The Demon Within finally gets released 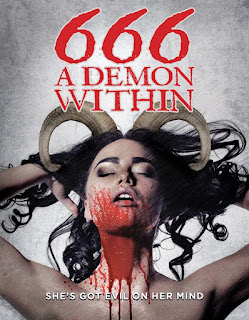 Eight years ago Harold Gasnier sent me a copy of his feature The Demon Within (on VHS!) and I wrote up my usual detailed review. So far as I can tell, no-one else has ever seen the film. It has sat, these eight years gone by, on my list of unreleased British horrors. I thought it was gone forever.

Today I spotted a new film called 666: A Demon Within on Amazon.com and something about it rang a bell in my head. So I checked and, damn me, it's Harold's film, finally available for people to watch. Everything comes around if you wait long enough. It's being put out by Bayview Entertainment on 8th March. Good for them, and well done Mr G on hanging on in there.

Synopsis: When their car breaks down on the way to their honeymoon destination, newlyweds Debbie and Tom are taken in by Lincoln, a mysterious stranger with sinister intentions. That evening, Lincoln reveals himself to be a demon and seduces Debbie into brutally murdering her husband. Now she faces a series of carnal and violent challenges in order to join him and become immortal. She must seduce a business man, tempt a young innocent woman at a nightclub and slaughter her way through innocent strangers to become one of Satan's chosen few. Starring Sophie Austin (Hollyoaks) and Mitch Powell (Saint Dracula 3D).

Harold Gasnier has acted in numerous British horrors including A Day of Violence, Bordello Death Tales, The Witches Hammer, Hellbreeder, Darkhunters and Sanitarium (which he executive produced). He also has assorted behind-the-camera credits on pictures such as Forest of the Damned and Bane. The Demon Within is one of two features he directed in the late noughties, the other being a thriller called Web of Deceit.
Posted by MJ Simpson at 18:04