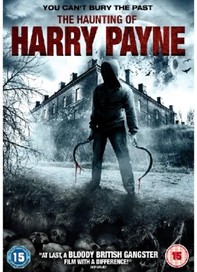 Martyn Pick's horror/gangster mash-up The Haunting of Harry Payne was originally scheduled for a UK DVD release in August 2013 with this rather groovy cover.

But someone has decided that more people buy gangster films than horror movies so it has been bumped to January 2014, given the generic new title Evil Never Dies and packaged as a straightforward gangster geezer picture in a generic sleeve design that gives no clues at all that this is a supernatural horror film. Thus ensuring that anyone who buys it will be pissed off and the sort of punters who might actually want to see this sort of film will pass it by. Smart marketing. 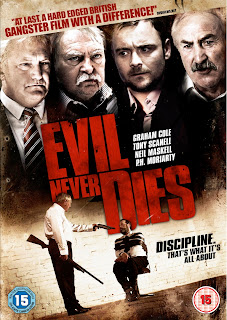 Synopsis: Ex-London gangster Harry Payne retires to Norfolk to be close to his wife, driven mad when he was forced to kill his best friend, psychopathic gang boss Eugene McCann. Immediately he is drawn into a murder mystery in which an obsessive local police detective targets him as the killer. Unknown to anyone, Harry has psychic abilities he has always suppressed with alcohol. Now he must confront the supernatural and his own personal demons to save his wife and free the tormented souls of the ghosts that haunt him.