Art of Darkness released in Germany 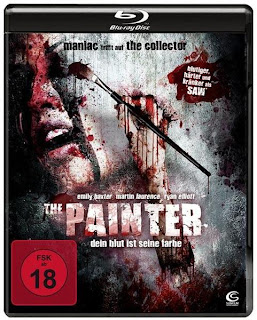 For some reason, my review of Art of Darkness (which I saw as Art House Massacre) has been getting a lot of traffic lately. This turns out to be because the film has finally had a release, albeit (in the manner of these things) in Germany. Over there the movie (which was shot as Art House) is known as The Painter. Crikey, it's got more titles than a Jess Franco film!

The DVD and blu-ray were released on 7th November by Sunfilm Entertainment with both German and English soundtracks so if you're keen to see the film you can order it from amazon.de. The Amazon page has a quote from my  review, which suggests it's probably on the back of the DVD too. And that's why I've been getting the traffic.

'The Painter' also played the big screen last month at the week-long After Dark festival in Germany.
Posted by MJ Simpson at 20:18