Richard Driscoll is back with... The Kamikaze Squad!

Great news, everyone! Richard Driscoll, the UK’s worst film-maker, is up and running again and planning to shoot new footage this month. (Although, as we all know, ‘planning to’ doesn’t mean ‘will’.)

Did you see Suicide Squad? Then prepare yourself for the next best thing (if we ignore every other film ever made) – The Kamikaze Squad! Awesome title, Mr D. Probably your best since Strangers on a Plane. What is The Kamikaze Squad? Why it’s “a comic book superhero movie in the vein of Batman”. Well, um, yes. Because Batman is a comic book superhero movie. Here’s the synopsis, from a press release distributed on 27th December:

When disgruntled Police Detective Frank McMillian decides to take the law into his own hands after the death of his partner, he decides to retire from the New York Police Department and transform into The BLACK KNIGHT a Batman style vigilante hero to enforce his own type of law.

The KAMIKAZE SQUAD Is a story about a group of men & women with special powers that have been hidden from the public. But when New York is in turmoil from a chemical weapon attack by billionaire sociopath William Bard, Commissioner Rosen decides to call in the help of Superhero vigilante The Black Knight to lead the 6 outcasts in a suicide mission to stop William Bard.

Driscoll has set up a Facebook page and a Twitter account for the film plus an Indiegogo page which tells us: “Inspired by the BATMAN universe, The KAMIKAZE SQUAD is a whole new concept in superhero movies. Utilising talents that worked on such movies as Batman, Star Wars, Harry Potter, the James Bond films, Kick Arse, Suicide Squad and Batman vs Superman. The KAMIKAZE SQUAD brings together a wealth of talent rarely seen in the low budget field.”

Sounds good and… hang about. Read me that list once again (and bear in mind that almost everyone in the UK film industry has worked on Star Wars, Potter or Bond at some time). Yes, he does indeed list a movie called Kick Arse! Presumably he means Kick-Ass. Remember, this is the guy who couldn’t tell the difference between Night of the Demon and Night of the Demons. Then again, maybe he’s planning his own take on the Kick-Ass concept, which he surely would call Kick Arse.

What else do we learn? “Filming is to take place from January 23rd. We already have the funds for filming by pre-selling various rights to the film but what we are looking for is the funds to enable us to finish Second unit filming & Post-Production funds to complete this Superhero movie and enable us to get the film released in August 2017. This will include 3 days filming in Los Angeles to shoot green screen effects plus editing, mixing and CGI work.”

For just $60 you can be an extra in the film, or for $750 you can have a speaking part. Despite the perk prices being in US dollars, filming will be in Sheffield. Can you make it? Please, if you can spare $60 (about 50 quid) it’s got to be worth it. I will publish here any report or photos I receive from this shoot.

You’ll notice that this is ‘second unit’ because as usual Driscoll is building this entirely new concept around existing footage. Here’s the cast list: 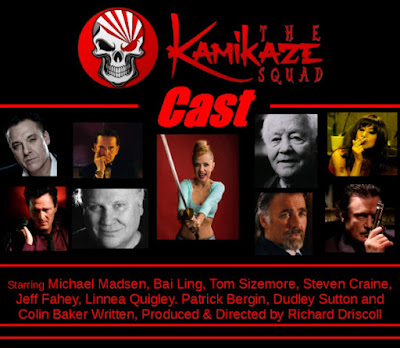 Everyone there has worked with Driscoll before so probably won’t need to shoot any new footage for this film – except for Tom Sizemore. Sizemore, who was convicted of battering his then wife in 2003, was allegedly dropped by his management after being arrested for beating up his girlfriend earlier this year. And when your career hits rock bottom (but your name still means something), that’s when Richard Driscoll comes calling.

Now here’s where the story gets weird. Because nothing is ever simple in Driscoll-land.

Here is a new listing on StarNow, posted just one week after that press release, with the same synopsis but calling the film The Black Knight. Well, people change film titles all the time, that’s fair enough. Driscoll is looking for a double for Michael Madsen and a double for his ‘lead actress’ which, given that you need to be 5’3” and don’t need to be Chinese presumably means Linnea Quigley rather than Bai Ling. Whether you need to look like Linnea now or Linnea when she worked with Driscoll in the 1990s on Kannibal isn’t definite. The playing range is specified at 18-35 but Quigley was already in her early forties (and looked it!) when she shot the footage Driscoll is apparently planning to reuse. 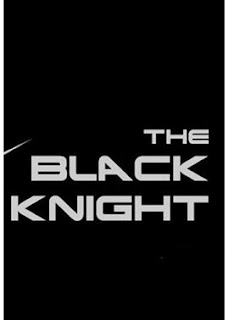 If you can double Madsen or Linnea you’ll be paid a princely 65 quid for your troubles. You could then invest £50 of that in being an extra in the film and still have enough for a pint and a cheap curry. But wait, there’s one more role: a speaking part which pays £120 (rather than charging $750). You need a playing range of 25-45 and a US accent, must be an ‘Angelina Jolie type', and shouldn't mind that “nudity may be required”. Who is this mysterious woman, stepping from her bath to give the main character a tarot reading? Why it’s ‘Historical character Elizabeth Bathory’!

Oops, my mistake. It’s actually a ‘historical character’ named ‘Elizabeth Bathroy’. (From the man who brought you ‘Edgar Allen Poe’ and ‘Philipe K Dick’.) Still, there's your horror element. Although how that fits into the Suicide Squad rip-off idea isn't clear.

Filming for these roles, we are told, will take place in Cornwall. Which brings me to this fascinating page for a company called Hofpix Media (‘hofpix’ = ‘House of Fear Pictures’), based just outside Redruth. Not Higher Nanpean Farm (which Driscoll no longer owns) but a charming barn conversion called Talltrees, formerly the location of a breakdown recovery business. As a convicted fraudster Richard Driscoll is of course banned from being a company director in the UK so how this has come about isn’t clear. Scroll down and eight films are listed on that page:


This last is interesting because it’s not a Driscoll film, it’s a pick-up. Directed by a prolific B-movie maker named Daniel Falicki (and co-written by Warren Croyle of Chemical Burn Entertainment) this American movie is already available on Amazon Prime.

Well, I must say that’s all very exciting. No-one has donated to the Kamikaze Squad crowdfunder yet but, seriously, one of you should totally get the ‘Be an extra’ perk. Think of the £50 as an investment, because you will save more than that in drinks bought for you over the years if you survive a Richard Driscoll production. Oh, and do please check out the video on the Indiegogo page. It may seen like there's nothing in it beyond some names, but wait for the end. It's hilarious.

More news as and when I learn anything. Good to have you back in action, Richie!
Posted by MJ Simpson at 19:18