One I missed: The Gates of Vanity 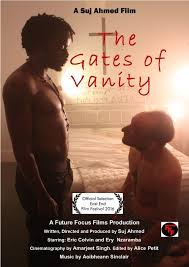 Not unexpectedly, British horror releases from 2016 that escaped my attention have started coming to light. Here’s one I had never heard of that has just crossed my radar – The Gates of Vanity.

Synopsis: Ben, a family man befriends a homeless young man, inviting him to stay with him while his family is away. The young man begins to show signs of disturbing behaviour. A harmless rejection triggers off a psychotic reaction from the young man who holds Ben captive. Ben is broken down psychologically until he becomes completely subservient. The young man intends to blackmail Ben and control his life after Ben’s release. Ben takes drastic action to reclaim his life and protect his family.

Directed by Suj Ahmed, this is the second feature from Future Focus Films. It was released to VOD platforms, including iTunes and Amazon Prime, in September following a premiere at the East End Film Festival in July.

The film stars Eric Colvin (well-known to British horror fans for his roles in Adam Mason’s films The 13th Sign, Dust and Broken, and also in Zombie Resurrection) and Ery Nzaramba. Here's the trailer...