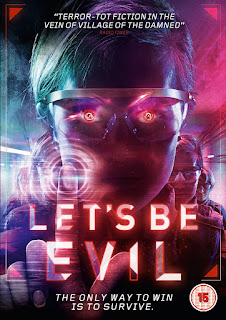 Vertigo Releasing put out Let's Be Evil on DVD in the UK on 30th January. The publicity calls it "a psychological sci-fi thriller set in Los Angeles" but don't be alarmed, it's actually a British horror film. Here's the press release:

Children’s skulls are thin. Despite the controversy over mobile phone radiation, step into the near future and the full dangers are still not yet disclosed. Irrespective, in order to avoid slippage down the international educational league tables, the government declares its intention to equip children with Augmented Reality Glasses. Trials suggest that being permanently ‘plugged in’ can significantly enhance IQ.

The potential benefits appear to be enormous, but the electro-magnetism adjacent to a child’s brain starts to cause unusual effects. Our audience is at first amused and delighted, and, in a breathtaking denouement, ultimately shocked, disturbed and horrified.