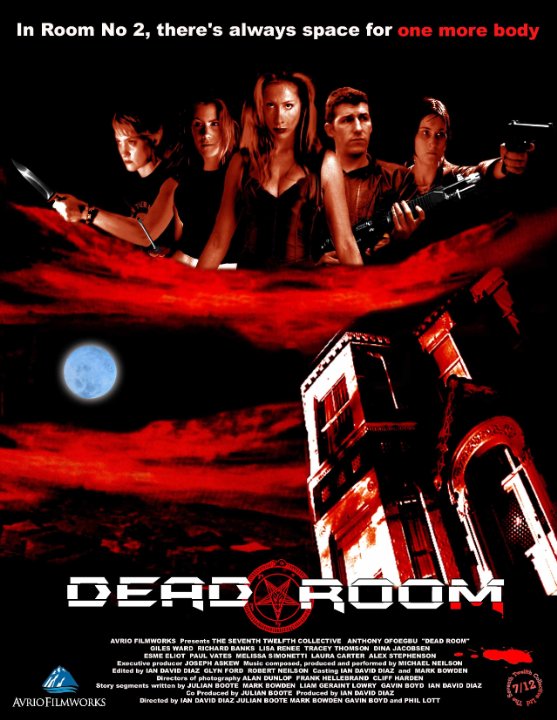 A lot of post-2000 British horror films are missing in action. I’ve got a list of more than 280 which at least entered production but which have never surfaced anywhere, not even a single screening. Of these, probably the oldest, and therefore the least likely to ever turn up, is Dead Room.

Filmed in May 2001, this was a multi-director anthology before the subgenre became popular. Julian Boote and Ian David Diaz had recently made a fairly decent little low-budget DTV thriller called The Killing Zone (which I might even still have on VHS upstairs somewhere) and they put the money they made from that into Dead Room. The four segments were directed by Boote, Diaz, Gavin Boyd (1st AD on The Killing Zone) and Mark Bowden (an actor in The Killing Zone) with an additional little bit directed by Phil Lott.

Now, to the best of my knowledge, Dead Room was never released and in fact I had great doubts whether it had ever been completed. Writing my review of Scar Tissue the other day I noted that cinematographer Alan Dunlop “also lit lost 2001 British horror anthology Dead Room” - and it got me wondering what trace there might be of the film on the web, 14 years on.

The IMDB page noted a Greek title, To domatio tou tromou, which I at first thought might be just an old-fashioned IMDB cock-up as that was the Greek title of a 2009 US thriller called The Killing Room. But no, incredibly, I came across evidence that there was an actual Greek release of Dead Room, on VHS and DVD. And thus it moved from my list of lost films to my master list of released British Horror Revival movies.

Dead Room was trade-screened at the AFM in Santa Monica in February 2002 which presumably is where someone from Greek video label Videosonic saw it and bought it. Although most sources list Dead Room as either a 2001 film or a 2003 film, the Greek release was in December 2002 so that’s what I’m counting as its date of first commercial release. 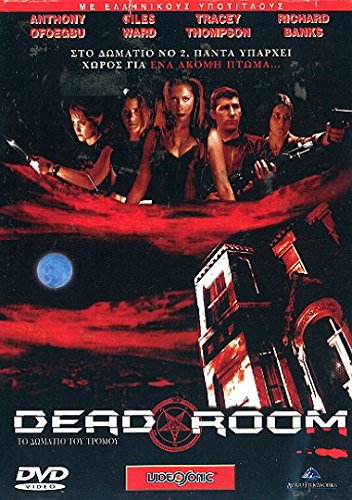 Which means two things. First: there were two British horror anthologies released in Greece in 2002 which have never been released anywhere else: Dead Room and Sentinels of Darkness. Although, unlike Sentinels, Dead Room had no Greek involvement. (In fact I’ve seen it listed as UK/Canadian which isn’t accurate. The AFM screening was courtesy of a Canada-based international sales agent, Avriofilmworks, but it’s an entirely British production, unlike Boote and Diaz’s subsequent horror feature Fallen Angels, which was a Canadian production shot in the UK.)

The one and only review of Dead Room ever published anywhere was on The Zone where Paul Higson watched a DVD-R sent him by Julian Boote. This does actually acknowledge that there may have been a Greek release but suggests that one of the stories was cut. I’m not sure about that as the Greek disc has a cited running time of 97 minutes, which is not much short of the 103 usually listed (the AFM screening was 94, although that would presumably have been a 16mm print).

All the above notwithstanding, what are our chances of ever seeing Dead Room? Well, one might be lucky and track down a Greek tape or disc on eBay. But in the meantime, Julian Boote’s story is on YouTube!

Running 26 minutes, ‘Need to Know’ is a very early example of ‘found footage’, being the video footage of an investigative TV journo who has been invited by a Government-sponsored hitman to watch him at work and blow the gaff on what the powers that be are up to.  The two move into a ground floor room in a house where gunman Jim (Giles Ward) sets up ready for his hit. Unfortunately for reporter Nigel (Richard Banks – not the actor of that name who appears in Muppets Most Wanted and Bill) Jim turns out to be a conspiracy theory nutjob convinced that the people he is hired to kill are aliens.

It’s not a bad little short, truth be told, with very effective playing from both leads. For such an early BHR film, it looks remarkably well-produced and there’s precious little to date it apart from the size of a mobile phone. This online version carried a 2003 copyright date and includes an extra scene – of Jim torturing a female victim (Tiffany Freisberg) – which was filmed two years after the main shoot (so won’t be in the Greek version).

The other three stories, which supposedly all take place in the same room, are listed on the IMDB as ‘Shrine’, ‘The Crows’ and ‘Séance’ and our only information on them comes from the official synopsis and Higson’s review. The synopsis reads: “A young and sensitive writer goaded beyond endurance by an old enemy, an actress who is the victim of a crazed, bomb-making Stalker, a late night seance which goes gruesomely wrong, and a dangerously insane assassin on a gleeful killing spree.”

The ‘young and sensitive writer’ story, which I think is possibly ‘The Crows’ (since the other two involve a séance and a shrine) is called ‘City Living’ in Higson’s review and stars Esme Eliot as a young hackette ghostwriting a footballer’s autobiography. Eventually the combined pressure of her agent and her neighbours tips her over the edge with presumably nasty results.

Melissa Simonetti and Alex Stephenson star in Gavin Boyd’s segment, ‘Shrine’, as a gangster’s daughter abducted by a stalker (Laura Carter) and the homeless guy who gets mixed up in the situation. Mark Bowden’s ‘Séance’ is apparently a darkly comic tale of a middle-class coven; this is the story that might possibly be cut from the Greek release.

Many of the cast were also in The Killing Zone and/or Fallen Angels but few seem to have done anything since. One exception is Anthony Ofoegbu as the landlord who provides the link between all four stories. He has been in episodes of Casualty and Spooks and also did some BBC radio dramas. Elsewhere in the cast we find Lisa Renée who was the waitress in the prologue of The Last Horror Movie and is now busy in America; Paul Vates who recently did some Lidl adverts; Alex King, who apparently moved into props work a few years later and now co-ordinates vehicle for blockbusters like Captain America and The Man from UNCLE; and Barry Lee-Thomas who was a copper in Cradle of Fear. 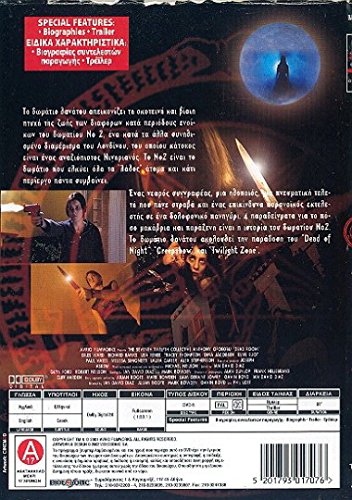 Bejhan Kalantar, the film’s sound recordist, is now a jobbing post-production co-ordinator/supervisor on gigs like Wolf Hall and Black Mirror. Editor Rob Neilson later worked on The Cabin in the Woods and Malibu Shark Attack(!) while his brother, composer Mike Neilson, subsequently scored a range of American DTV schlock including Stonehenge Apocalypse.

Ian David Diaz went on to make a thriller called Bad Day but seems to have disappeared now. Julian Boote has concentrated on acting with roles in, among other pictures, May I Kill U, Deadtime and Evil Souls. Diaz, Boote and others were part of a group called the Seventh Twelfth Collective, which produced Dead Room.

If I ever get my hands on one of those Greek discs, I’ll add a full review to my site. In the meantime, it’s good to finally strike this one off my ‘unreleased’ list: proof that everything turns up eventually…

Update: 29th March 2015
My thanks to Guy L Murray who has brought to my attention another release of Dead Room, slightly predating the above. Apparently there was a Thai DVD in October 2002, released by a company called Right Beyond.
Posted by MJ Simpson at 19:24