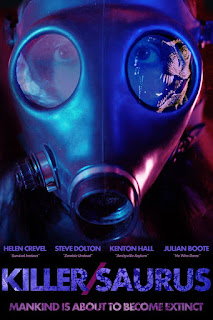 Steve Lawson, the creative force behind Survival Instinct/Rites of Passage and Nocturnal Activity, has a new film on the way - and it's got a deadly dinosaur in it! Killer/Saurus is in post, here's an exclusive first look at the poster and here's the synopsis:

When a scientist runs short of funding for his life-saving medical Bio-Printing research, he accepts an offer of investment from a shadowy military organisation. In return, he is forced to use his technology to create the ultimate battlefield weapon - a full size Tyranosaurus rex.

After a horrific accident in which the dinosaur massacres his research team, the scientist shuts down the project. However, his investors demand results and it can only be a matter of time before the deadly T rex is unleashed upon the world!

The cast includes Helen Crevel who was terrific in Survival Instinct (and is also in another upcoming horror feature, David Easton's Ensnared), Steven Dolton (Nocturnal Activity, Devil's Tower, Zombie Undead), Kenton Hall (an Andrew Jones regular, who was in Amityville Asylum, Theatre of Fear and Valley of the Witch) and Julian Boote from Evil Souls, May I Kill U and recently unearthed 'lost' horror anthology Dead Room.