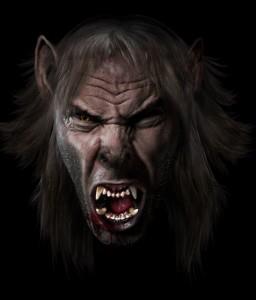 I don't have much info yet on Lunatic, except that it's a werewolf movie which is aiming to shoot next year in my home town of Leicester. Written by Stephen Batchelor (of whom I know nothing) and produced by Leicester's own martial arts master Kwoklyn Wan, hulking older brother of fashion guru Gok!

"At first, a small town murder looks to be the work of wild dogs. Unfortunately, wild dogs don't walk on two legs. This town has a secret, but how many will have to die before the truth comes out?"

The only horror feature previously shot in Leicester was Rhys Davies' Zombie Undead. Apparently Lunatic is casting for extras now. Could this be another chance for me and young TF Simpson to boost our resumés?

Find out more on the movie's Facebook page.
Posted by MJ Simpson at 22:43