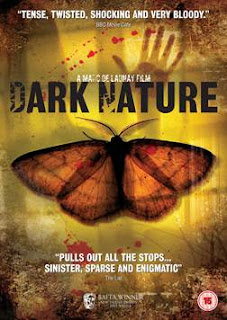 Marc De Maunay's Dark Nature finally makes it to UK DVD on 31st December. The film was released in the States by Troma back in 2010, although don't let that deceive you - it's a long way from being a 'Tromatic film'.

"Dark Nature is a dark, tense eco-thriller in which a young woman fights to protect her family when they come under attack while on holiday at a remote location in the Scottish Highlands.

"Imogen Toner (Love Bite) and Vanya Eadie play Chloe and Jane, a daughter and mother whose already tense relationship is put under considerable stress when they go on holiday to a remote location. Like lambs to the slaughter, an escalating series of shocking incidents leads Chloe and Jane into a violent and unexpected situation they could never have anticipated."