Film 89: The Living and the Dead 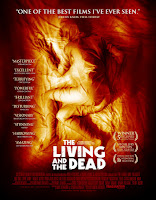 I've known Simon Rumley since he made Strong Language (here's what I wrote about it in Total Film) although we've never met. He kindly sent me a screener of The Living and the Dead and it's very bit as good as I had heard. That said, it's nowhere near as intense and upsetting as I had heard, but that may be a consequence of watching it at home on a sunny afternoon rather than on the big screen.

Nevertheless, this is a quite magnificent film with so many layers of meaning and interpretation I don't know where to begin. Is it a horror film? Well, it played Frighfest, which is usually a reliable indicator. The horror here is not violence or gore. It's dread, but dread of what we might become, dread of how we may not be able to care for our loved ones. Anchored by three superb performances, this is one of the best films I've watched in the course of writing the book.
Posted by MJ Simpson at 21:04