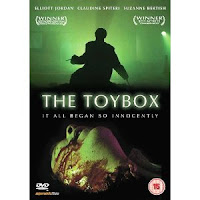 This one has proved a problem. Every film in the book includes a handful of quotes from reviews (where there are any!) to give an idea of its critical reception. Usually there are some pro and some anti, and the prevailing trend is clear and makes sense. For example, almost all reviews of 28 Days Later say it's great (which it obviously is) while most reviews of Spirit Trap say it's rubbish (which it is).

The Toybox has, since its release, received almost uniformly positive reviews, including from a number of well-respected critics. Which is odd. Because it's awful. Really, really bad. The most dire script imaginable, fully of clunky, wooden dialogue strung out on a plot that makes no sense. No discernable directorial talent. And the absolute worst sub-sub-amdram acting I have yet seen on this project. Seriously, there is better acting in a Jason Impey or Richard Driscoll film.

Yet the positive reviews frequently single out the acting for special praise. I really, really can't explain this one.
Posted by MJ Simpson at 21:39