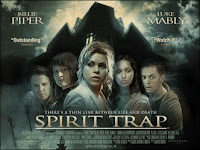 Like so many of these films, Spirit Trap was more fun to write about than watch. Just the biggest grab-bag of hoary old haunted house cliches you've ever seen, it's jaw-droppingly awful. Sole point of interest is that it was the last thing Billie Piper did before she made Doctor Who.

Or at least, that was the the sole point of interest until now. Despite the almost complete absence of media coverage (apart from various reviews pointing out how dire it is) I have a couple of relevant, contemporary interviews on file which gave me some previously undocumented background info. Of which the most interesting revelation is that 'first-time director David Smith' was actually a pseudonym for someone who was already very experienced and has gone on to be enormously successful.

So probably a smart move taking his name off this crap, then.
Posted by MJ Simpson at 23:53