Looking forward to: Dead of the Nite 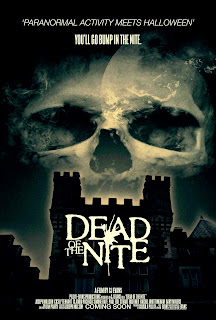 Dead of the Nite is a supernatural horror which is mostly shot and has none other than Tony Todd lined up for the final batch of shooting later this year. Here's the information which was kindly sent to me by the director/producer, SJ Evans. Evans has an acting role in Night of the Living Dead: Resurrection and is attached as producer to Ruggero Deodato's mooted sequel to House on the Edge of the Park.

You can find out more on the film's website and Facebook page. Scroll down for a very brief teaser trailer.

DEAD OF THE NITE

Pillay-Evans Productions are delighted to announce we have agreed terms with US horror legend TONY TODD to appear in our feature horror DEAD OF THE NITE.

Tony has a string of huge box office hits, surpassing $1.2bn and unforgettable appearances in a host of Hollywood Blockbusters including Candyman, The Crow, The Rock and this years US #1 Final Destination 5.

We know Tony will bring his distinct style and his acting pedigree to the part of Ruber when he flies over from L.A. to South Wales in 2012.

We are also giving fans the opportunity to be involved in making the film from acting opposite Tony, to even being a credited producer by visiting: www.indiegogo.com/dead-of-the-nite.

You can keep up to date on the film and get further information by visiting our Facebook page or following @DeadoftheNite on Twitter.

When a group of ghost hunters investigate the infamous Jericho Manor, they soon realise it's not just ghosts that go bump in the night! As the team start getting slaughtered, the survivors need to discover who, or what's killing them before it's too late.

We have already shot 85% of the film in Craig-y-Nos Castle last year, and once funding has been raised will film there again and in various locations in Cardiff. As like our previous film TATTOOS: A SCARRED HISTORY, we like to give back (in that case donate money to childrens charity Angelwish), with DEAD OF THE NITE we will be hiring local people from disadvantaged backgrounds, and give them new skills to start a career in film and have the opportunity to work with skilled crew and cast.