Strong opening weekend for 47 Meters Down 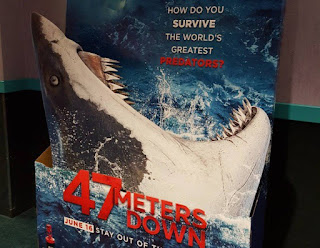 Johannes Roberts' shark pic 47 Meters Down, which I make no apologies for constantly plugging, took $11.5 million in its opening weekend according to Box Office Mojo.

It was the third highest opener after Tupac biopic All Eyez on Me and, inevitably, Cars 3 (both of which are aimed at very different audiences) and the fifth highest grosser overall with Wonder Woman and The Mummy still performing predictably strongly.

Entertainment Studios Founder, Chairman and CEO, Byron Allen said: "We are very happy with our first wide release, 47 Meters Down. The movie is perfect for the summer, and an absolute crowd-pleaser as indicated by our outstanding per-screen average."

This is the biggest US opening weekend for a British film since Spectre in November 2015.
Posted by MJ Simpson at 19:38