I first ran a teaser for Spidarlings way back in March 2012, since when it has been not only on my British Horror masterlist (in the Coming Soon section) but also on my unofficial Looking Forward To list. 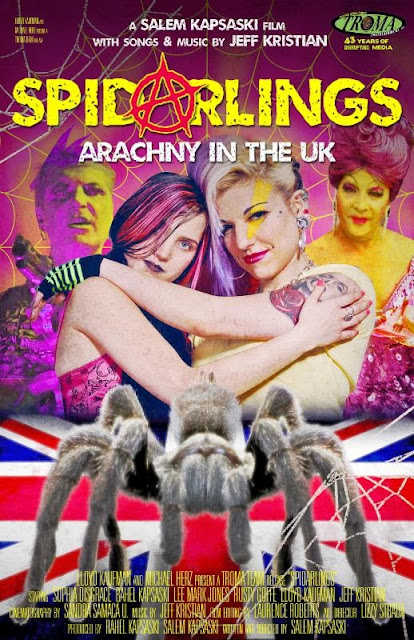 Salem Kapsaski's long-awaited punk horror comedy musical finally gets a VOD release next month - courtesy of my dear old mate Lloyd Kaufman. A handful of British films have been distributed by Troma in the past, including Alien Blood, Dark Nature and The Evolved Part 1. But Spidarlings looks easily the most Tromatic and is a perfect fit for Uncle Lloyd's venerable corporation.

Poverty stricken lovers Eden and Matilda have enough trouble just getting through the days...Their Landlord is trying to terrorize them and strange things seem to be going on at "Juicy Girls", the place where Matilda works...but when Eden buys a pet spider the real troubles start.

While creating Spidarlings, Director Salem Kapsaski drew inspiration from his own real life experiences with financial struggles, a ruthless landlord, and relentless threats to his family from an unstable individual. These real life experiences mixed with influences from John Waters, I Love Lucy, Lloyd Kaufman, Peanuts cartoons and an amazing musical score by Jeff Kristian are what makes Spidarlings a totally original, remarkable independent film.

You can find out more on Facebook. Meanwhile, here's the trailer, complete with glorious Troma ident: