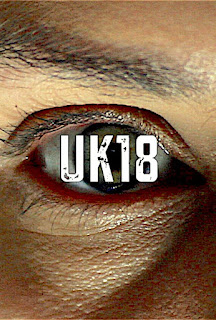 Andrew Tiernan is well-known as an actor  (The Bunker, Snuff-Movie, Quatermass Experiment remake) but also dabbles in directing. His first feature, Dragonfly, is on my masterlist of 21st Century British Horror. It's a police procedural thriller which sounds somewhat borderline but this review mentions "As DS Blake becomes more involved with the Corrine Grosvenor case, his life descends into a world of conspiracy and human sacrifice via a website named ‘Dragonfly’." Human sacrifice sounds like horror so ut's on the list until I either watch it or get more information.

Tiernan's second feature, UK18, was released on Vimeo on Demand on 23rd December. The IMDB lists it as 'horror' but on the film's Facebook page the genre is cited as "Independent Arthouse Thriller Drama Documentary" - which covers almost every cinematic genre except horror (and musical).

The synopsis reads: "2018: neo-fascism has taken over. The Government implements a program to chip the population of the UK. Eloise (Shona McWilliams) a documentary film-maker suspects she is being brainwashed by a secret Government organisation."

To me that doesn't sound like a horror film so it's not going on the masterlist just yet. Hence the 2016 list is staying at 78 films for now. Well, actually 79 - I've found another one since I posted Part 1 this morning.

However, if UK18 turns out to have horror content, or gets covered by horror film media, I might yet add it to the masterlist.
Posted by MJ Simpson at 17:19