All the British horror films released in 2016, Part 1: January-June

To the best of my knowledge, 78 British horror films were released in 2016. Since there are usually about five to ten films whose releases only become apparent later, we’re really talking of 83-88(-ish) films. This is about average for recent years, although it’s slightly down on 2015 when I listed 83 movies in my year-end round-up, subsequently expanded to 89 on my master list.

January kicked off with a DVD release of The Blood Harvest, the fifth feature from Northern Ireland director George Clarke. Though not without its problems, notably a disconnect between the main serial killer story and the sci-fi resolution, this was a distinct improvement on most of his earlier films. There was also a DVD of The Carrier, directed by Anthony Woodley (Outpost 11). Escaping a deadly plague on an airliner bound for Greenland, a group of survivors find the contagion is aboard with them.

Fergus March’s The Trap ran for three nights at a cinema in Islington, which is about the minimum that can be considered a theatrical release by my house rules. It’s a comedy horror in which two groups – “professional cat burglars” and “young, misfit jobseekers on a team building exercise” – negotiate deadly traps set by an overzealous security guard. It has since played some festivals but there’s no home release as yet. There was a US disc of Dan Brownlie’s Serial Kaller about a group of models trapped inside a recording studio, hunted down by a mentally unstable fan. The all-star cast includes Dani Thompson (also co-writer), Suzi Lorraine, Debbie Rochon and Stuart Brennan. Also, two films popped up unexpectedly on YouTube this month: Justin Carter’s Devon-set found-footager TORN: A Shock YOUmentary and Andy Dodd’s impressive study in psychopathy The Apostate: Call of the Revenant (featuring Terry Dwyer from Loose Women as a cop).

February saw a limited theatrical release, courtesy of Film Volt, for Steve Lawson’s cracking cat-and-mouse horror-thriller Rites of Passage, retitled as Survival Instinct. When it arrived on DVD in June the title had changed again to the meaningless Footsoldier. Another East Midlands film-maker, Anthony M Winson, saw his latest ghost story House of Afflictions (filmed as Ominous) released on US disc. There were British DVDs of Evil Souls, a fine Anglo-Italian shocker from the del Piccolo brothers who previously brought us The Hounds, and Cryptic, a gangsters/vampires mash-up from the team who gave us the awful World War Dead: Rise of the Fallen. The strong cast included Robert Glenister, Ray Panthaki and Vas Blackwood.

At the microbudget end of the scale, there was The Sheltered, a curious 2013-shot feature about werewolves running a homeless hostel, and Devil Dog Shuck Returns, the latest crazy epic from Paul TT Easter. Both of those were on YouTube. And there were VOD releases for two significant films: Ruth Platt’s acclaimed The Lesson, with two schoolkids pushing a teacher too far, and Hangman, the first British film since 2007 for Adam Mason (The Devil’s Chair). 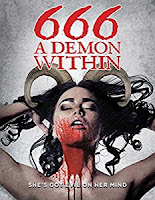 March was a busy month for British horror fans, not least because the complete works of the late Michael J Murphy were released to YouTube, including two features never seen before. ZK3 and Nekros are strictly for Murphy fans, of which there are a surprising amount. I don’t think there’s actually more than about 15-20 of them, truth be told, but you know, even that many is surprising. But not as surprising as the American DVD release, after a mere eight years on the shelf, of Harold Gasnier’s 2008 feature The Demon Within (as 666: A Demon Within). Up to now I think I was the only person who had ever seen this. Who knows, perhaps I still am.

Johannes Roberts’ Indian-set Monkey’s Paw-style chiller The Other Side of the Door played cinemas on both sides of the Atlantic in March, with a US disc following in June. There was also a limited theatrical release for David Farr’s creepy The Ones Below, about new parents and their downstairs neighbours. Tom Paton’s ambitious scifi-horror Pandorica didn’t actually play cinemas until April but is listed here because of a March VOD release. There were also VOD releases for Eugene McGing’s paranormal investigation found-footager The Unfolding (via Frightfest) and Matt Cruse’s “psychosexual chiller about one woman's descent into hell” The Watcher Self.

A priest, a Vatican investigator and a possessed housewife could be the set up for joke but is actually the principal cast of The Exorcism of Anna Ecklund, the March disc of which was the first of two releases this year from Andrew Jones’ North Bank Entertainment. Another prolific name in modern British horror, Sir Jason d’Impey, saw a US DVD release for his amazingly powerful and transgressive three-hander Fluid Boy. There was also a US disc of Michael Anderson’s The Hatching, a creature feature about a ravenous crocodile prowling the Somerset Levels. Potential croc-food includes Andrew-Lee Potts, Thomas Turgoose and (please let it be him) ‘comedian’ Justin Lee Collins. German and Japanese releases followed but nothing in the UK yet.

Another British film that was without honour in its own country was Steve (Outpost) Barker’s  ‘Jurassic Park but it’s zombies’ romp The Rezort aka Generation Z. This played Spanish cinemas in April with a Spanish disc in July but won’t hit UK shelves until January 2017. There were more zombies in Immune, directed in Coventry by Steven Taylor and released on VOD. Blink and you’ll miss brief appearances by Yours Truly and The Boy. Equally post-apocalyptic – but zombieless – was AD Barker’s A Reckoning aka Straw Man which finally emerged onto YouTube. Fans of Neil Marshall movies will be interested in this long-awaited indie, shot back in 2009, as it stars Leslie Simpson and Axelle Carolyn.

There was a theatrical release (and much acclaim) for Gareth Bryn’s The Passing aka Yr Ymadawiad, the first British horror feature shot entirely in Welsh. Rising star Holly Jacobson (currently in post on her own short film Harry and Grace) was frighteningly intense as creepy twins in Mumtaz Yildirimlar’s My Guardian Angel, out on US disc this month. There was also a disturbing child central to (and staring from the poster of) Rebekah Fortune’s Deadly Intent. Finally for April, Michael Munn of Martello Films makes the first of an impressive three entries on this list with his self-released debut feature Once Upon a Haunting.

May brought us Benedict Mart’s feature about a woman luring a man to his doom on a little island. Originally entitled Siren (when I wrote an early treatment) this was shot as Siren Song to avoid confusion with Andrew Hull’s 2011 BHR film but was released on US DVD as Blood Lust (which could have caused confusion with Richard Johnstone’s 2015 BHR film Bloodlust if that hadn’t been retitled Vampires – try and keep up). In Germany it was called #Cannibal Island (yes, with a hashtag). C Thomas Howell was the token Yank providing name value.

Neil Marshall lent his name value as executive producer to haunted radio station saga Dark Signal, the long-awaited second feature from Infestation director Ed Evers-Swindell (who provided all the Crawler voices in The Descent). Hour-long YouTube video The Search Ends was, I guess not unexpectedly, the sequel to a half-hour short called The Search Goes On. Directed by Daniel Franks, it’s something to do with a missing boy and an evil spirit. Not sure if there’s a first film called The Search Kicks Off. And there was a VOD release for Preternatural, a recursive tale of film-makers getting spooked, directed by Gav Chuckie Steel (The Shadow of Death).

June was a bit quieter with only two British horror films released. There was a US disc of Vampires: Lucas Rising, the second feature-length re-edit from Jason Davitt’s LGBT shirtless serial Vampires: Brighter in Darkness. And a VOD release for Alex Lightman’s bleak story of post-apocalyptic sibling rivalry, Tear Me Apart.

Stay tuned for July-December, posting tomorrow along with an alphabetical checklist.
Posted by MJ Simpson at 10:58