Press release: Northern Irish slasher film Braxton will receive its hometown premiere at this year’s Belfast Film Festival. The film is expected to play at 8pm on Sunday 17th April at the Movie House on Dublin Road, as part of the fest’s “NI Independent” category.

Written and directed by 21 year-old Belfast filmmaker Leo McGuigan, the film is described as “a fun throwback to the popular slasher films of the 80s and 90s, such as Scream, Halloween and My Bloody Valentine”.

It was shot throughout Northern Ireland in the summer of 2014 by a then 19 year old McGuigan. The film had its US premiere in October of 2015, where it won the “Best Foreign Slasher Feature” prize at the Fright Night Film Fest in Louisville, Kentucky, one of America’s biggest horror festivals.

“We’re really pleased with the reception the film has received so far,” McGuigan, who co-produced the film alongside Margaret McGoldrick (RTE’s Farr) remarked, “and the idea of unveiling it to a homegrown audience is exciting and terrifying at the same time. The film was genuinely a labour of love in every respect, and that’ll hopefully come through on the screen!” 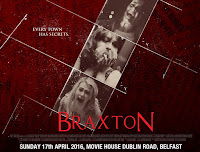 The film features an ensemble cast of Northern Irish talent including Shaun Blaney (RTE’s Farr, Halo: Nightfall, The Frankenstein Chronicles) and Diona Doherty (Britain and Ireland’s Next Top Model) and tells the story of a serial killer, Tommy Miller, who returns to a small town on the anniversary of his initial spree, forcing the original survivor, now police officer, (Blaney) to seek him out before it’s too late.


[Find out more about Braxton at www.facebook.com/BraxtonMovie, and here's the trailer. It looks great! - MJS]