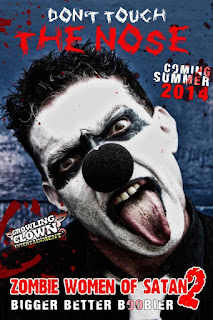 I just finally got round to watching Zombie Women of Satan - only five years after it was released - and although I probably haven't got time to write a full review, I can record here that I laughed like a drain and enjoyed it enormously.

So I thought I would check on the progress of the sequel, cunningly entitled Zombie Women of Satan 2, which was shot back in July 2012 with some pick-ups in August 2013 and again in January 2014.

In March this year, the ZWOS Facebook page announced that "Zombie Women of Satan 2 is about 8 weeks away from being fully complete", but because these things always take longer than you think, a more recent post on 12 June reads "Well things are finally progressing again after a few delays ... ZWoS 2 should be going to get the colour grading done in July .. then we'll be able to start looking for distribution deals for it "

The sequel is the directorial debut of Chris Greenwood who co-wrote the script with Warren Speed, who of course returns as Pervo the Clown. Kathy Paul returns as Mother Zandler. Victoria Broom and Victoria Hopkins are listed on the IMDB page but it's not clear if they're actually in the film.

Here's hoping that ZWOS2 emerges soon and that it's as good as the first one.

And if you still haven't seen the first ZWOS, here it is, legitimately, on YouTube: