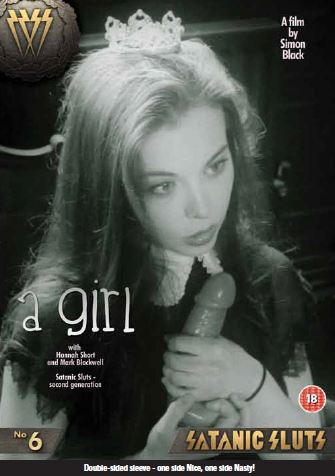 Where the original three Satanic Sluts vids were basically collections of performance vignettes which, with the best will in the world, can't really be considered 'films', Satanic Sluts version 2.0 is a series of actual feature-length narrative productions. Nigel sent me a screener for one of the first, an avant garde feature called A Girl (review coming soon, if you'll pardon the expression).

I think A Girl can just about be considered a horror film in its depiction of a descent into madness. Some of the others lined up clearly aren't horror, but some titles do sound very promising indeed. Nigel currently has four projects on IndieGoGo including these two little gems:

WHAT IS 'I WAS A FRANKENSTEIN NYMPHOMANIAC GIRL' ABOUT?
A mad scientist obsessed with creating a living human from the remains of dead bodies creates a female monster but there is one problem, she lacks a brain! Then the scientist's ghastly assistant accidentally knocks over a drunk woman and brings her body to the scientist's laboratory. Unknown to the doctor is that this woman had a pathological condition and suffered from nymphomania, an uncontrollable and excessive sexual desire. Once the new brain is implanted in the monster the scientist realises his terrible mistake...

Or, if you fancy something a little less jolly:

WHAT IS 'THE BLACK HOUSE' ABOUT?
A bleak expressionist re-imagining of Edgar Allan Poe’s Fall of The House of Usher, featuring “The Evil Twins" from Tean SYNister.
Posted by MJ Simpson at 00:24