"With a foreword by Sean Pertwee" 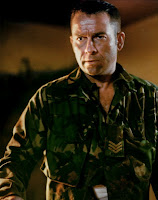 As the end of the British Horror Revival book hoves in sight, I am delighted to announce that Sean Pertwee has very kindly agreed to write a foreword for the book.

If there's a recurring face in the BHR it's Pertwee. Best known for Dog Soldiers of course but he's also in Botched, Mutant Chronicles, Wilderness, Doomsday and When Evil Calls, as well as other British horror titles outside of the book's dates. And yes, he dies in most of them.

Also, the book has had a slight title change. It's now called Urban Gothic: The British Horror Film 1998-2008. After bandying various options back and forth, this was the one that both I and my publisher were happy with.
Posted by MJ Simpson at 21:19