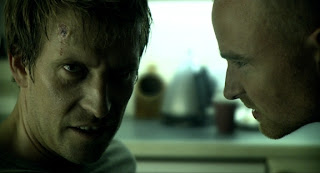 Oliver Milburn's Harsh Light of Day will receive its world premiere at Cinequest in San Jose on 3rd March (with additional screenings on 6th and 9th). The film is pencilled in for a UK theatrical release in April.

Synopsis
After returning home from the launch of his book about the occult, Daniel Shergold's house is broken into by thugs, who beat his wife to death and leave him paralyzed. A depressed agoraphobic in his secluded country cottage, Daniel mourns the death of his wife while being cared for by home nurse, Fiona. He is unable to accept the lack of success the police have in finding his wife's killers. Daniel accepts a visit from a mysterious stranger who insists he can help him reap revenge. He agrees and is thrown into a strange and horrific transition into darkness. With renewed strength, Daniel sets out to avenge his wife's murder, but at what cost?