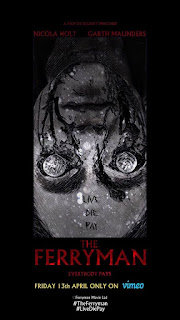 Bleak and miserabilist (in a good way), The Ferryman is the sort of dour, oppressive horror that the UK does so much better than anywhere else. After her mother’s death, Mara attempts suicide and subsequently finds herself living with the father she never knew whom she initially hates (and who confusingly only looks about ten years older than her). Two further bizarre deaths – one off-screen, one very gory one on-screen – shatter Mara’s already fragile mental state, a situation compounded by necessary police questioning. She’s being stalked (or thinks she is, at any rate) by a personification of the Greek ferryman Charon, although it’s not really clear why. Well-directed and acted, the photography and lighting give no clue that this was shot on an iPhone although the sound suffers occasionally. Maguire boosted his on-screen production values by blagging access to a TV studio in Manchester via his day-job as a security guard on the Coronation Street set. Not to be confused with the identically titled 2007 Anglo-Kiwi sea-bound soul-swap psycho shocker.