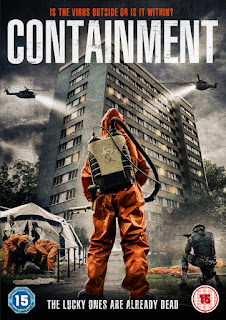 Containment, a sci-fi-horror picture directed by Neil Mcenery-West from a script by David Lemon, gets a limited theatrical release from next week as well as hitting on-demand platforms.

The film has a preview tomorrow (Saturday 5th) in Henley, then it plays That London from 11th to 14th, Southampton for one night only on 14th, then from 14th-17th you can catch it in Bristol, Derby, Manchester, Liverpool and Leeds. There’s also a one-off screening in Brighton on 21st. Full details on www.containment-film.com

It was released on US VOD things last month and hits UK VOD things from 11th. For those of us who still like proper shiny discs like Grandad watched, the DVD is out on 5th October from 4DigitalMedia.

Synopis: Mark, a failed artist estranged from his wife and son, wakes one morning to discover that the doors and windows of his flat have been sealed shut. He assumes it’s a sick joke until he sees an army of ‘Hazmats’ – mysterious figures in protective suits – patrolling the grounds and attacking his fellow residents. When a neighbour smashes through their adjoining wall, Mark joins forces with his new-found ally and others from within the block. Together, they must work to defend themselves from the sinister Hazmats. But they soon discover that the greatest danger is sealed inside with them…