Darkest Day plays cinemas down south in May, plus DVD release 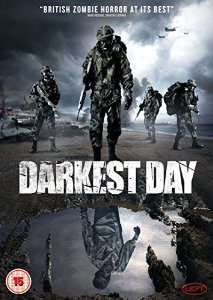 Low-budget British zombie feature Darkest Day gets a limited theatrical release next month. You've just missed a couple,of previews in Brighton (where it was shot), but you can still catch the film on the big screen if you live down south.

The printed publicity material dates the theatrical release to 1st May but the premiere is actually on Mondat 11th May at The Gate, Notting Hill. Then you can see it at No6 Cinema, Portsmouth on Sunday 24th May; Duke's at Komedia, Brighton on 25th; and Stratford East Picture House on 26th. You can book tickets for all four screenings here.

The rest of the UK can pick up the DVD when it is released by the always reliable Left Films on 25th May.


Synopsis: Dan wakes up on a beach with no memory. He discovers the ruins of an empty city ravaged by a deadly virus. After being savagely attacked by a psychotic stranger he is taken in by a handful of survivors, but Dan's arrival starts to divide the group and arouse suspicion. It soon becomes clear that the army are hunting him down and the group are forced to evacuate the safety of their home, embarking on a dangerous journey to escape. As fragments of Dan's lost memories start to return, and with soldiers in close pursuit, he starts to realise they are in even more danger than first thought...

Darkest Day is directed by Dan Rickard who knows a thing or two about zombies, having provided special effects on The Dead and its sequel.
Posted by MJ Simpson at 23:05