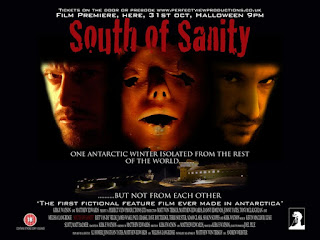 Here’s a British horror film that’s something different - South of Sanity is the first non-documentary feature ever shot in Antarctica! Kirk Watson is a Scottish cameraman who has been documenting, for the past four years, the construction of the absolutely amazing Halley VI ice station on the Brunt Ice Shelf in the British Antarctic Territory.

Because there’s not much to do during the long Arctic winter, Watson spent July to October 2009 making a feature film, with his colleagues as the cast. It will be released on DVD on both sides of the Atlantic on Halloween, the same day as the big screen premiere in Watson’s home town of Aviemore.

Here’s a BBC website report on the film, and here’s Watson’s own website where you can buy tickets to the premiere and where the DVD will be available in a couple of weeks. And here’s the trailer: