Another retitling for 'Death Tales' 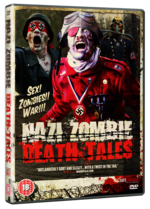 Nazis are quite hot right now in B-movies, with Iron Sky released this week (for one day) so I suppose there's marketing sense behind it. But it feels clunky to me, whereas Battlefield Death Tales feels poetic (and has an alliterative resonance of Bordello Death Tales).

And still only one of the stories has Nazi zombies in it.

Personally, I can't wait for the film whatever it's called.
Posted by MJ Simpson at 07:57