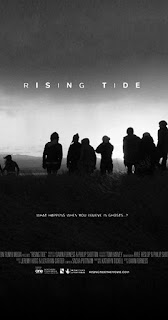 Unavailable for some time now, this is a smart little film with a pleasingly ambiguous narrative. To celebrate their A-level results, ten Geordie friends head for a music festival, get booted off the coach for rowdiness, walk to the coast and end up trapped on a causeway-accessible island. They tell spooky stories around a campfire but, in commendable defiance of tradition, don’t get drunk or high. In the morning, two are missing and others vanish one by one, while a tall, dark-clad figure is occasionally glimpsed. The key, somehow, is ‘new girl’ gothette Izzy. A final act flashback montage of violent deaths and slashed tents contradicts the silent, mysterious disappearances, suggesting the whole thing might be in Izzy’s head. Well shot and edited, with atmospheric music by, among others, top folkie Kathryn Tickell. Shot in 2011, this had a couple of local screenings and was briefly available on the now defunct Vodo website. Music video director Shotton allegedly coined the term ‘Madchester’!