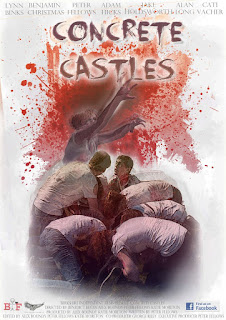 Inventive and original, clever and confident, this amateur zombie feature shot by teenagers for £80 deserved a much better fate than a momentary online release. The prologue and three acts follow the simultaneous stories of four characters who interact, with some scenes repeated from different points of view. The main narrative is in black and white but most of the film is lengthy colour flashbacks. Weighty themes – drugs, prostitution, rape, miscarriage and an inappropriate teacher-pupil relationship – are mixed with lighter elements, including scenes told through comic-book panels and a brief West Side Story pastiche. Despite this, and the variable acting, and the 128-minute run-time (six of them credits), this works – and works brilliantly. Filmed in August/September 2010 in Bracknell, Berkshire (an unprepossessing new town of square subways and rectangular shopping centres) it had a local screening in April 2011. Fellows later referenced this in scripts he wrote for Veep!
Posted by MJ Simpson at 19:19