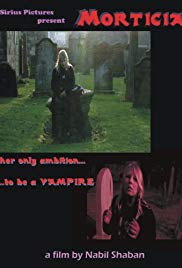 Interesting and worthwhile, despite low production values, Shaban’s only feature is a character study of a 12-year-old goth. Kylie, who prefers ‘Morticia’, is regarded as the local weirdo by children and adults alike. An able and intelligent child, her poetic school essay about wanting to become a vampire causes chaos when read out in class. She steals a paperback of Dracula from the library and reads it in a churchyard, then steals a bat from Edinburgh Zoo. Her bumptious mother and long-suffering father, a disabled Gulf War veteran, don’t know what to do with her. Eventually her romantic view of death is cracked by overhearing her dad talk about the women and children he was required to kill in Iraq. Right at the end, Dracula himself appears, probably a hallucination. Disabled actor Shaban (still fondly remembered for a role in 1980s Doctor Who) plays a psychologist. Night Kaleidoscope director Grant McPhee pops up in the credits as colourist. Shot in 2009, this premiered at a vampire film festival in October that year.