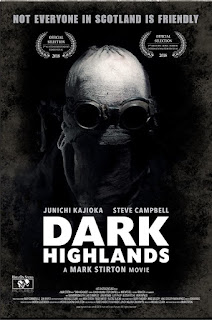 Largely devoid of dialogue, this impressive game of cat and mouse plays out against the stunning vistas of the Cairngorms and offers something more than just a psycho stalker. UK-based Japanese actor Kajioka plays an unnamed artist who hikes into the Scottish wilds to camp and paint the landscape. He is targeted by ‘the Gamekeeper’, a masked and bekilted nemesis armed with a range of firearms, an RC drone and an unseen (for reasons which become clear but are, to be honest, fairly obvious) dog. Though never explained, a splash panel prologue suggests there is some supernatural element to the Gamekeeper who pursues his quarry at one inexplicable remove, taking him down each night with a tranquiliser dart and even erecting his tent. There’s all sorts of weirdness going on here, lifting what could easily have been a formulaic thriller into gripping, scary, mind-scrambling horror territory. Brian Cox provides brief name-value narration. Stirton and producer/DP Clark previously made ambitious sci-fi epic The Planet and black comedy One Day Removals.