The Demonic Tapes 2: The Doll 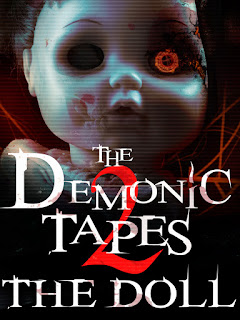 Mansfield Dark rides the current ‘creepy doll’ wave with this unnerving James-ian ghost story which, if anything, suffers slightly from under-using its off-the-shelf creepy doll. Single mum Rose, enjoying a week of solitude while the kids are with their dad, discovers a Walkman and some cassettes in her cellar which prove to be recordings of a psychologist interviewing a possessed child. There are two spirits at work, ‘Socks’ and ‘Mr Sheets’, although the story is unclear about their relationship. Fox is terrific in the lead role, her long hair and wide eyes evoking memories of 1970s horror victims, not least Shelley Duval in The Shining. Mansfield Dark regular Munn is the handsome young vicar who helps her; we’re left to wonder whether the sexual tension between the two has contributed to the supernatural situation. As usual, Richard Mansfield wrings fear from simple effects: a door opening, a duvet lifting, an indistinct figure in a white sheet. Originally released in February 2018 as The Demonic Doll, this shares a basic premise and location with Mansfield Dark's most successful movie so was retitled as an ersatz sequel in June.