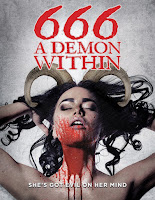 Simon Cox’s debut feature Driven concerns an author who discovers that a serial killer is copying the events of his latest book. Shot in 1998, this became available to buy through Cox’s website in April 2009 (retitled Written in Blood) – and still is, as far as I know. No stranger to long-term projects, Cox has been working on his sci-fi epic Kaleidoscope Man since at least 2008.
Posted by MJ Simpson at 20:36